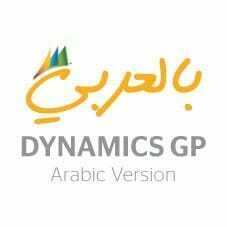 Microsoft Dynamics GP is traditionally available in the Middle East and in Arabic speaking countries, plus it is easily adoptable in these countries, where local language is based on Arabic characters.

As we all know Microsoft Dynamics GP still not released in Arabic language by Microsoft, and in the Middle East region in general we are getting allot of requests to have the application interface in Arabic.
Therefore to work around this we have outsourced translating all strings and messages in the application to a specialized company in this field and imported translated strings and messages into GP dictionaries, we have used "Forms" and "Reports" dictionaries for the import so GP core dictionaries will not be affected and errors caused by this change will be avoided.